Qanuilirpitaa? (How are we now?) This is the question the Nunavik region has sought to answer with the 2017 Nunavik Health Survey. This survey, now complete, followed-up with participants of the 2004 Nunavik health survey, and invited additional Nunavimmiut aged 16 years and older to participate. The survey documents physical and mental health outcomes, as well as the social and cultural factors associated with these outcomes. One new aspect of the survey was a focus on community conditions influencing health and well-being in each of 14 Nunavik communities. Professor Riva has been the scientific co-lead for the community component of the survey with her colleague, Professor Christopher Fletcher from Université Laval.

The community component has aimed to:

Knowledge generated from the community component of the Qanuilirpitaa? 2017 survey informs local and regional actions for community mobilization and development. 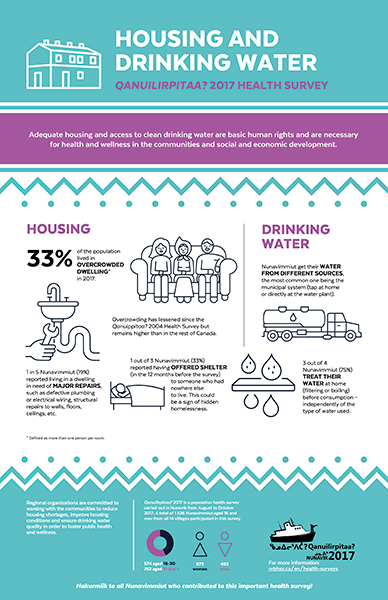 Sociocultural Determinants of
Health and Wellness 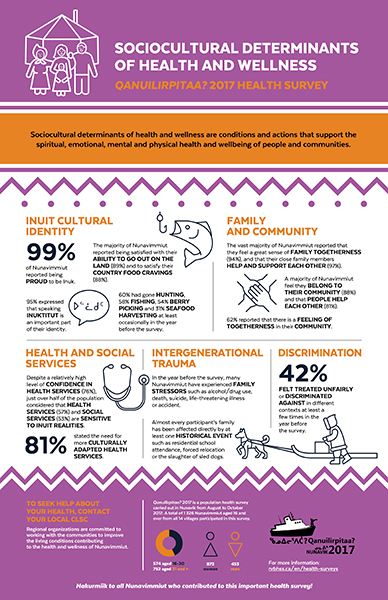 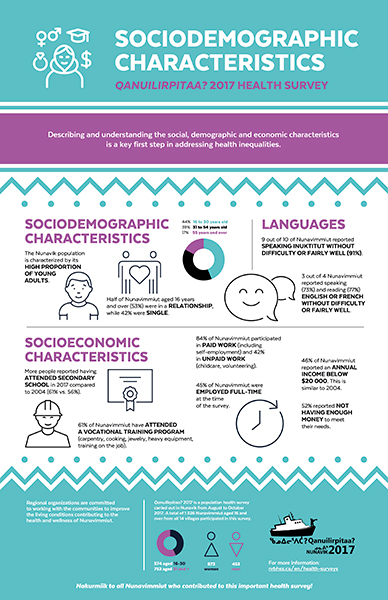 Our project begins with a question: "Qanuikkat Siqinirmiut?" or "How are the people in the south?" The number of Inuit living in southern cities is increasing rapidly, with just over 27% (17,695) now living outside the traditional territories of Inuit Nunangat.

In contrast to those in the north, very little is known about the health of Inuit in the south. It is clear that Inuit in both the north and the south experience significant health disparities when compared to the majority population. In southern Quebec, the development of services for health promotion, prevention, and the treatment of illness is limited by a near complete absence of data on the health of the population.

This project is intended to build a knowledge base on the health and well-being of Inuit in the south through the development and implementation of a population health survey. A collaboration between the Southern Quebec Inuit Association and a group of university-based researchers, the team includes researchers, community members, service providers, students, and political and social organizations who are poised to act on the findings of the research.

FEHNCY is a research study that will look at the nutrition, health, and environment of First Nations children and youth aged 3-19 years across Canada in communities through partnerships and community participation.

The results from the study will inform government policy and community program recommendations with the goal of improving the health of First Nations children. The study will contribute to capacity building within First Nations communities and Assembly of First Nations (AFN) regions. Prof. Riva is a co-PI on FEHNCY and leads the research on the relationship between housing conditions and health.